About 3 years ago, a young mother (we’ll call her Jenny) sought clinical counseling for herself and three small children: a 3 year-old, sweet, quiet boy, a 4 year-old rambunctious boy and a 5 year-old adorable girl. This mother’s situation was simply heartbreaking. Her past involved leaving home at an early age due to sexual abuse and meeting a man who was clearly on the wrong path. Soon after, she became pregnant and he wanted nothing to do with her or the baby. 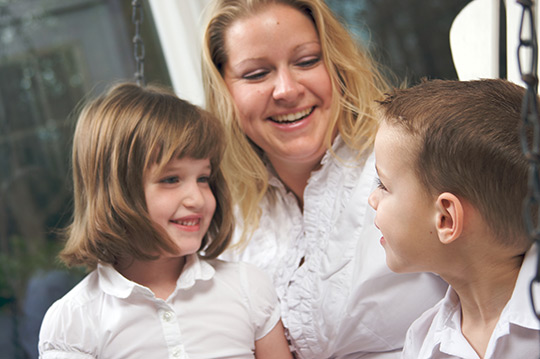 While pregnant, she met another man that she thought was the man of her dreams (we’ll call him John). John helped her through labor and even signed the birth certificate as the child’s father. However, shortly after marrying him, he began abusing and sexually assaulting her against her will almost on a daily basis. As a result, Jenny became pregnant again – feeling trapped inside a terrible situation and alone, with nowhere else to go. Jenny believed the lie that John had been feeding her – that if she left, she wouldn’t be able take the children with her.

Another child came and went while she tried to stay in the situation and make John happy. Eventually, her circumstances were too much to bear. Unable to stand the abuse, Jenny chose to leave her kids and went to live on the streets until she eventually found a shelter. There, she was advised that her husband couldn’t keep her children from her against her will (unless the court took part in the decision). She immediately began fighting to get her children back and decided to move in with a distant relative to get her life back on track. When John finally turned over the children to her, they were sick, dirty, and worn down.

Soon after getting her children back, Jenny moved. In her new town, she met a wonderful man who was helping her raise her family and brought joy back into her life. Then Jenny’s dream life was interrupted when a dreadful letter in the mail arrived. John was awarded visitation of the kids. This is when Jenny showed up at Community Service Council for assistance. I could see that she was stressed out and completely exhausted and that her children were terrified and very unhappy. Jenny would need a lot of support to get through what turned out to be a two-year court battle.

At first, I helped Jenny with managing her children’s behavior problems which included acting out, talking back and throwing tantrums. I taught Jenny about reward charts and impulse control. We also spoke about abuse, self-esteem, personal space, and inappropriate touching. Most of all, I built a relationship with this family founded on trust and safety.

As the kids began to feel safe, they reported that John would laugh at their progress - telling them that the counseling support they were getting was ‘stupid.’ The little boy began regressing in school, wetting his bed and exhibiting intense anger. The little girl was more vocal about her feelings and reported that John was verbally abusive to them leaving her and her brother in time-outs for 5-6 hours at a time.

At this point, I called Child Protective Services, but without physical bruises, the case came back as unfounded. Eventually, the bruises started showing up. We reported this incident with no successful resolution. Fortunately, the little girl spoke up and started asking questions that pointed to sexual abuse which we could report as well. Meanwhile, John was good at doing everything the court required of him and kept dodging prosecution.

Next, the little boy stepped forward to report some inappropriate touching by John. As a result, I spent many hours on the phone with Child Protective Services, the public guardian, and the case managers to write reports, send emails and prepare Jenny for court appearances. Finally, things started to change and the DCFS investigations became more serious. The courts started interviewing John’s family members and John began dodging court dates and not returning phone calls. He no longer could keep up the façade.

Later that month, I got an email that I will never forget. Jenny had won the case! The judge had awarded Jenny sole custody of her children. Jenny would be allowed to move her children out of state and John would receive no visitation. Currently, Jenny still checks up with me from time to time. The kids are back into a positive routine, loving life and are excelling in school. Their behavior has improved, their moods are much happier and Jenny is finally at peace and experiencing joy in her life.

This story demonstrates the passion we have as counselors for our clients and how we always go the extra mile to support them. I want to thank the many agencies and donors that financially support CSC so that we are able to keep helping families like Jenny’s.

Imagine that your spouse is terminally ill and you’re about to lose your home because you can’t keep up with the bills. That’s exactly what happened to Ed. He was a carpenter who made great money until the recession caused him to lose his job. As a result, Ed took a job as a handyman in order to make ends meet. However, once his wife became ill, he fell behind on their mortgage. Then a friend told Ed about CSC and how they might be able to help him. Unfortunately, Ed decided to hire an attorney instead (costing him $400 he didn’t have) only to find out that the attorney couldn’t do anything to protect him from losing his home. Ed’s reasoning for not pursuing his friend’s referral was because he thought CSC’s services sounded “too good to be true” and were meant for people in worse situations than his. After a third mention by his friend, Ed was desperate enough to finally meet with a housing counselor from CSC. As a result of working with us, Ed avoided foreclosure and was awarded a grant that paid his mortgage for the next year, allowing him time to be with his ill wife.

Out of pure gratitude, Ed shared how CSC helped him avoid losing his home and even shared flyers about their services at the courthouse in order to “pay it forward.”